bootstraplib provides several functions for creating (i.e., bs_theme_new()) and adding to (i.e., bs_theme_add_variables() and bs_theme_add()) a global theme object. By default, bootstrap() includes this global theme when compiling Bootstrap Sass into CSS. Eventually, both shiny and rmarkdown will implicitly call bootstrap() to grab their Bootstrap dependency (as of today, you need to do this explictly), which means that you’ll eventually be able to use the same code to theme shiny, rmarkdown, as well as relevant by-products (e.g., flexdashboard).

This article summarizes the fundamental concepts behind theming with bootstraplib. These foundations build on top of lower-level foundations provided by the sass package, so it’s highly recommended that those new to the sass and the Sass language also read the sass overview. The aim of this article is provide you with the mental model you’ll need to perform advanced theming with bootstraplib. If you’re looking for more of a “recipe book” of shiny/rmarkdown theming examples with Bootstrap 4, see the Recipes article.

bootstraplib themes are built upon sass::sass_layer(), which provides a convenient structure for organizing and combining multiple ‘layers’ or ‘bundles’ of styles in a composable way. Layers, and therefore themes, have three main components: defaults (for overriding variable defaults), declarations (for declaring Sass functions/mixins), and styling rules. Indeed, when you initialize a theme with bs_theme_new(), the class and names of the theme reflect these core pieces of the sass layer:

This following sections detail how to add your own layers of sass code to the theme via bs_theme_add() (and, a special case of it, bs_theme_add_variables()) with a special focus on common and useful patterns for theming with Bootstrap Sass. By far and away the most important component of the theme (i.e. layer) is defaults: this is where you have the opportunity to override Bootstrap variable defaults, which is the main (and easiest) approach to theming with Bootstrap Sass.

Whenever you bs_theme_add() to a theme, it hoists any defaults to the top of the existing theme defaults. You can pass any input understood by sass::as_sass() here, including a named list, which is interpreted as variable definitions.

When overriding variable defaults, it’s best practice to include a !default flag, which says “assign this value to this variable if it isn’t already defined”. This way, downstream theming decisions are allowed take precedence over upstream ones. Since this is such a common and suggested practice, we’ve provided bs_theme_add_variables(), which makes sure you’ve included a !default flag and interprets its arguments as variable names:

To demonstrate that the green default actually overrides the red default, we’ll use bootstrap_sass(), which uses the current theming defaults (and declarations) to compile Sass styling rules as a CSS string. We’re using bootstrap_sass() here purely for the sake of demonstration, but take note that this function can come in handy for styling custom CSS classes with Bootstrap Sass (this styling rule says to set the foo class’ color property to $primary).

The right-hand side of a variable definition may be any valid Sass expression, so to do something like add a new theme color, which requires assigning a Sass map to the $theme-colors variable, you can do:

Theme declarations appear immediately after defaults, and are intended for mainly 2 things: Sass mixins and variable overrides that want to reference other variables or functions. Note that writing your own mixins is really own useful if you intend on writing a lot of your own custom styling rules, so we don’t discuss them, but here’s a contrived example of how you might want to add mixins to the current theme with bs_theme_add(). In this example, since new theme declaration are placed after existing ones, mixins that appear in the mixin2.scss file could use mixins from the mixin1.scss file.

In some situations, you may want to use Bootstrap functions (e.g. color-yiq()) and/or other Bootstrap variables in your variable definitions. For this scenario, you may set .where = "declarations" in bs_theme_add_variables(), which places the variable definitions after (instead of before) Bootstrap declarations (i.e., variables, functions, and mixins). For example, we could have the body’s background inherit the secondary theme color and have the body’s foreground color automatically contrast based on the background color.1 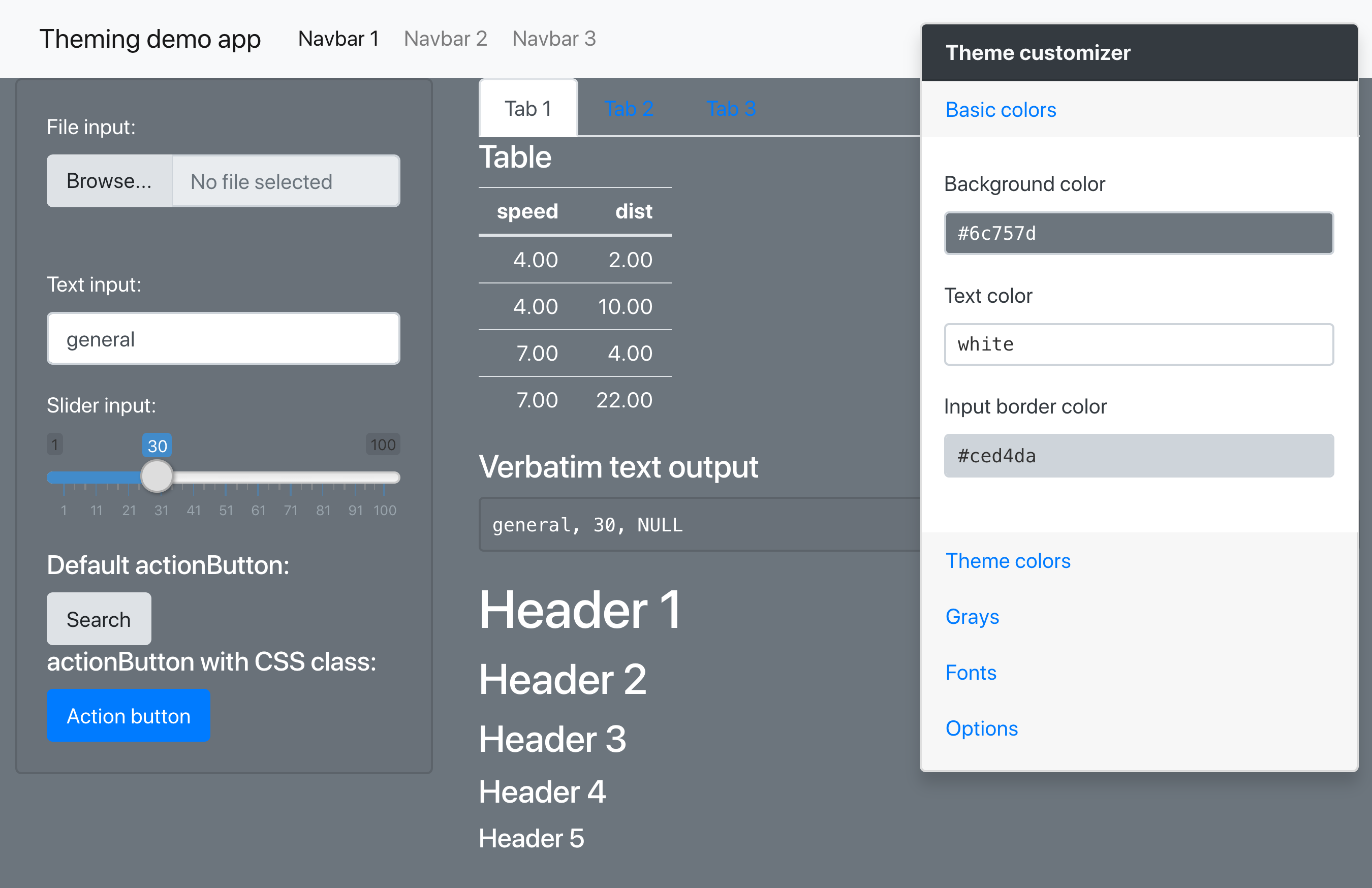 Generating custom styling rules based on Bootstrap is useful in at least a couple scenarios:

For an example of (2), see this person.scss file, which defines rules for a custom person class, for displaying someone’s name, title, and company. To include these rules with the bundle that bootstrap() generates, provide them to the rules argument of the bs_theme_add() function.2

It’s also worth noting that sass::sass_layers(), and thus themes, have more than these three components. It’s also possible to resolve relative file imports and include HTML dependencies.